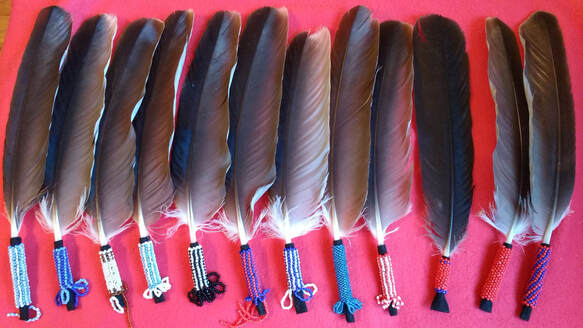 Lynn is an author, advocate, artist, and public speaker. Her work encompasses both anti-colonial work and the celebration of Indigenous knowledge. She challenges Canada’s practices, policies, and laws of colonial genocide such as the land claims and self-government process, sex-discrimination in the Indian Act, the continued destruction of Akikpautik / Chaudière Falls–an Anishinaabeg sacred place, and Canada’s lack of policy addressing Indigenous women and girls with disabilities who are bigger targets of sexual violence. She weaves wampum belts, builds petro-forms, and paints. She also has several professionally published peer reviewed books: “Gehl v Canada: Challenging Sex Discrimination in the Indian Act” (2021), “Claiming Anishinaabe: Decolonizing the Human Spirit” (2017), “The Truth that Wampum Tells: My Debwewin on the Algonquin Land Claims Process” (2014), and “Anishinaabeg Stories: Featuring Petroglyphs, Petrographs, and Wampum Belts” (2012). She has several academic contributions in journals and chapters in books; more than one-hundred community contributions in magazines, websites, news papers, and op-eds; as well as two-hundred personal blogs. Lynn is frequently called upon as an expert by various media outlets to offer commentary on Indigenous issues.

Lynn Gehl identifies as Algonquin Anishinaabe-Ikwe. Her traditional territory is now called the Ottawa River Valley. She is a member of the Algonquins of Pikwàkanagàn First Nation. Lynn is one of a few dozen Indigenous people in the world with a doctorate in Indigenous Studies. She has an Honours Bachelor of Arts in socio-cultural anthropology (summa cum laude), a Masters of Arts in Canadian Studies and Native Studies, and a Doctorate of Philosophy in Indigenous Studies. As an undergraduate, Lynn was the recipient of many scholarships and awards. In graduate school, she was both an Ontario Graduate Scholar and a Social Sciences and Humanities Research Council Fellow. She also has a diploma in chemical technology and worked in the environmental field caring for the water, monitoring Ontario’s waterways for toxic organic pollutants.

Lynn is one of eight children. In her life she has experienced disability, wretched poverty, danger, and forced relocation. Today she continues to struggle with the intergenerational effects of Canada’s colonization and genocide, continues to struggle with a congenital vision disability, and thus walks through intersectional oppression at every minutia of everyday of her life.

Although it was not until she was in her early thirties that Lynn moved beyond reading and writing at a public-school level, her publication record is strong with five books – three of which are peer-reviewed and published with a professional publishers: “Gehl v Canada: Challenging Sex Discrimination in the Indian Act” (2021), “Claiming Anishinaabe: Decolonizing the Human Spirit” (2017), and “The Truth that Wampum Tells: My Debwewin on the Algonquin Land Claims Process” (2014). She also has six chapters in books, thirteen journal articles and other contributions. thirty magazine publications, eighty-five news articles, and over two hundred- personal blogs.

Beginning in 1985 after when the Charter of Rights and Freedoms was brought into existence in 1982 Lynn began the process of addressing sex discrimination in the Indian Act. In this process she completed family oral research, archival research, and moved along a 23-year court process that eventually led to a limiting “victory” at the Ontario Court of Appeal. With a solid understanding of the power of cultural hegemony Lynn created the “6(1)a All the Way!” concept, a concept that both the Senate of Canada and the United Nations harnessed when arguing for the need for Canada to eliminate all the sex discrimination in the Indian Act. Lynn also created the Indigenous Famous Five concept which later shifted where in the process she became a member of the Indigenous Famous Six. Both were important contributions to shaping the ideology of key players in the need to eliminate the sex discrimination in the Indian Act.

Today Lynn is one of Canada’s mainstream news media voices regarding critical analysis on Indigenous issues within the borders of Canada. She is a known expert on ableism, settler allyship, Canada’s Algonquin genocide, the Algonquin land claims process, the history of sex discrimination in the Indian Act, Indigenous and Northern Affairs Canada’s unknown and unstated paternity policy, Indigenous women and girls with disabilities as bigger targets of sexual violence, intersectional oppression, and Indigenous Knowledge. Appreciating her as a knowledge holder both the Senate and the House of Commons of Canada have called upon her to speak as an expert on matters related to Indigenous people. She has also made submissions to the Inter-American Commission on Human Rights and the United Nations regarding Indigenous women and girls. Lynn is the creator of #IWagWid.
​
Shaped by chemical technology, caring for the water, a long-time plaintiff against the largest law firm in Canada the Department of Justice, and the disciplinary studies of cultural anthropology and Indigenous studies Lynn is a cultural critic operating within the Indigenist paradigm. She is clear she is not a feminist. She is an author, artist, advocate, and orator. Committed to community-based knowledge production and dissemination Lynn curates a personal website.

Some of Lynn’s favourite statements are:

Head shots for public use: